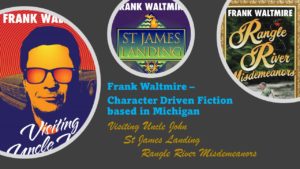 As many have developed new habits, good and bad, during the pandemic era, I dove into writing fiction.  Since childhood, I have dreamed of working as a writer, a novelist.  Over the years, I had written several short stories and three-page vignettes, but never anything more than a few thousand words.  Once I began the process of putting together full-length stories, I found it hard to stop.  Now, I have published three novels since 2020.  I prefer to publish under a penname, so I chose Frank Waltmire, using my middle name, Francis and a last name phonetically similar to my own.

Visiting Uncle John – Set in Middle Michigan in 2011, the story follows 29-year-old Eli Parker and his incarcerated Uncle John Parker.  After a shooting in a restaurant parking lot, Eli begins visiting his uncle in prison, where Eli learns as much about himself as he does about his fascinating Uncle John.

“Wonderful storytelling. Very easy read. I’m a stickler for great character development, and Waltmire delivers in spades. I read it in one day… couldn’t put it down.” – Amazon Reviewer

“…an intriguing story with interesting and well-developed characters. If you attended one of their gatherings, you would know these folks and jump right into the conversation. The story caught my interest and pulled me along, right up to that ominous last boat ride! This is a good book for curling up and meeting some real folks, blemishes, and all.” – Amazon Reviewer

Rangle River Misdemeanors – At age 67, Oliver Warrington prefers to spend time on his favorite trout stream, or sipping whiskey with his eccentric artist buddy, Sebastian. When his peaceful life is disturbed by ignorance and corruption, Oliver becomes an environmental warrior. Set in rural Michigan in 2016, Rangle River Misdemeanors tells a story of love and tragedy, humor against despair, and a good fight in a losing battle.

“A microcosm of America in a nutshell. Great characters, and a plot that will keep you reading. The best in a series of from old Frank.” – Amazon Reviewer

All my books are available on Amazon as Paperback or Kindle.   In case you want a signed copy or you don’t use Amazon, they are also available directly from me on this website, under “Book & Record Store” tab.  – CW